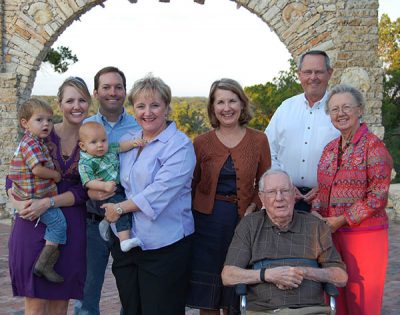 It all began with an episode of 60 Minutes that touched a young mother’s heart. After watching an episode of the news magazine that featured women and children escaping dangerous homes to family violence shelters, Cindy McCoy and her husband Dennis set out to discover if their community of San Marcos had such a place. Dennis and Cindy McCoy first toured HCWC’s original family violence shelter and after discussing the inadequacies of the shelter with his  parents, Emmett and Miriam McCoy, and siblings, the whole family decided to build a brand new shelter.

Even after Dennis’ early death in a tragic accident left her a young widow with two daughters, she continued to work tirelessly for the betterment of HCWC. She has served on the Board of Directors,  chaired two Capital Campaigns,  volunteered and even completed her internship in the Counseling and Resource Center while pursuing her Master’s Degree in Counseling all the while being  a consistent and generous  donor to the agency.

Three generations of the McCoy family have now become HCWC supporters  and Cindy remains committed to helping families in need. What began with Cindy and Dennis that night years ago has had a lasting impact on victims in Hays and Caldwell Counties. Without the McCoy family most of the growth that HCWC has undergone in the past few years would not have been possible.

The McCoy Family Shelter and the Dennis & Cindy McCoy Counseling and Resource Center bear their names because of their generosity and tireless support of the agency and mission.

I have been working with HCWC for over 30 years and my heart goes out to all victims of domestic violence. The thought that maybe they returned  to their abusers because they had nowhere safe to go and my desire to help provide them with a safe place is one of the reasons I am so committed to HCWC. I am truly honored to be able to support the Center with my love, my time and my funds. -Cindy McCoy 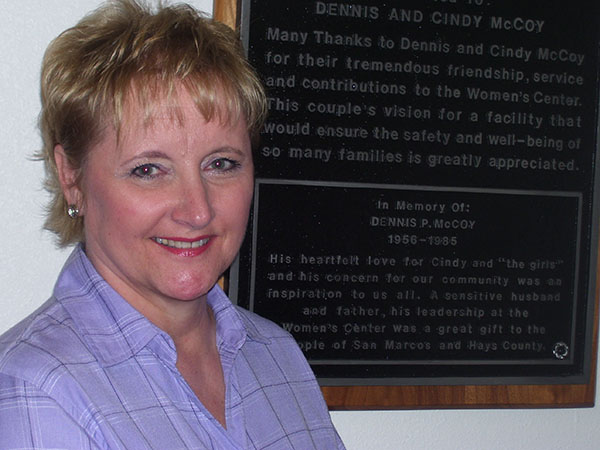